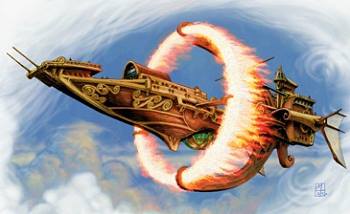 The party’s perch on the cliff quickly became contested by the an impossible sight. Cruising through the air as smoothly as if it sat on the water’s surface was a long wooden craft with a long sloped hull. A whispered conversation the cliffs or superior Drow darkvision might of been the cause but the craft closed on the party.

A squad of bugbear slave-soldiers jumped overboard to attack the party, one missed his step and plunged into the abyss. Soon the whole team was mixed up in a melee with the bugbears while a Drow wizard slung spells at them from the ship. The tables turned quickly a with a few quick critical hits and a Cloudkill spell that blocked the party’s exit.

A second Drow appeared, a young one no more than a teenager seemingly he called himself Kelinidintra ‘Kelin’. A name familiar to Zaria though he was no more than a young boy the last time she saw him. A brief sceptical reunion occurred and the Kelin told Zaria her brother Kel’zen was to be sacrificed at the Temple of Lloth, a rather typical fate for most male Drow. She lead the party onto the ship to seize it for themselves and save Kel’zen, and hopefully it would have room to save the original missing slaves. Malachai cleared the deck of the enemy ship with a ferocious fireball.

A quick leap off the cliff onto the deck of the ship as it started moving again. Kelin quickly explained that the Drow had recently captured the refugees of a destroyed Svirfneblin city, many equipped with strange artifacts and technology. Stealing it for themselves the Drow of House Aly’aer were planning a daring raid against their long term enemies the Elves. They only needed a target but that information was hidden inside the head of a High Elf in the torture chambers of House Noquduis [Sacred Whips] the long time rivals of House Aly’aer [Legendary Blood].

The debate took a moment too long as elite Drow warrios and slaves attacked the boarding party from another part of the ship. A brief melee followed and although Roqfurt was knocked out by a poison arrow the rest of the team dealt with the enemy quickly. Aurora rent asunder one warrior with her greatsword while Jaak dispatched another with his rapier. Kelin dispatched with the slaves a blast of black energy from his strange staff weapon.

The next part of the ship a series of apparent cabins another Drow team lay in ambush. Sailors and assassins who apparently aboard as passengers attacked with a globe of darkness but the magical darkness was banished by Roqfur brandishing the sword he looted from Calderous, a Sun Blade, a simple hilt with a blade made of the compressed energy of the Sun. The bright Daylight banished the darkness and put the Drow team on the disadvantage as assassins attacked with Kamas and Spiked Chains. While the Drow tried to divide the party and wear them down individually but even with a crippled arm Aurora dispatched her foes with furious headbutts of her horns. Malachai dropped enemies mercilessly with cleverly used Magic Missiles. Zaria transformed into a Lion and mauled one of the assassins. Jaak ducked back into the last room and took down an assassin that chased him. Axiom kept everyone alive. Roqfurt used the Sun Blade to deal terrifying cauterizing wounds. Aurora survived an ambush by the assassins and forced them to try weaker targets. A seconds later the team was mopping the Drow blood off the floor and preparing to seize the next part of the ship.