Male Drow are commonly weaker of stature, shorter, and thinner. Kel’zen whose name translated to the term “Legendary Cut” in Elven was none of these. With dark skin, the common pale white hair Kel’zen’s two outstanding traits were his large stature for a Drow Male muscular and graceful the second was a pair of piercing amber eyes.

Born roughly eight years before Zaria he was almost an adult before she was born and was too young to remember much of her eldest brother before he was sent on an expedition into the Deep Underdark. Many thought the young male of House Aly’aer dead for years. He had had the potential to be the Weaponmaster of his House even from the early years in Fighter’s College he mastered the Drow Fighting Style Z’ress A’thalak or roughly translated ‘heavy blade’ an often eschewed style of the 13 Forms taught by Drow Weaponmasters that focused on mastery of the longsword over the rapier.

The aging Weaponmaster of House Aly’aer at the time engineered a scheme to kill Kel’zen before the boy could become a threat to his position by getting him sent on a near suicidal raiding party into the ancient ruins of the Deep Underdark below the City that had none had returned alive from. Kel’zen and his party disappeared into the ruins and was not heard from again until 60 years later when Kel’zen emerged from the ruins as the sole survivor with a small treasure trove of artifacts from the age of Empires. Kelin’s strange staff and the Orb both being among the trove. His reward the simple task of being Zaria’s guardian for the next twenty years.

When Zaria first disappeared he lead a small insurrection in the House that killed several notable figures in Drow politics but no blame could be tied to his hands and he escaped wrath by the grace of Lloth’s own twisted laws. When Zaria returned a year after her disappearance he appreciated how his sister had changed for the better but knew she would be unfit to be a cleric of Lloth because of that change for the good. When she fled the Right of Xul’tar where an acolyte of Lloth fornicated with a Demon from the Abyss and became a creature of Lloth’s power he helped her flee back to the surface and dispatched several hunting parties, assassinated several wizards capable of scying or locating, and removed several of the cities best trackers with his own blade. Eventually the string of murders was tied back to Kel’zen but it lacked concrete proof and he was set on several suicidal missions but survived them all.

It wasn’t until rumors said a party of surface adventurers had stumbled onto the Drow slaving scheme did Chastra finally just flat out ordered his execution by sacrifice. He was becoming too powerful as a male, cornered by six Clerics Kel’zen surrendered peacefully but his sacrifice was delayed several days as the Clerics of Lloth at the Temple were eager to add the seed of a male of prowess to the blood-lines hoping to breed stronger daughters from his blood. Then the events of the party’s raid on the Drow Houses occurred leading to his subsequent freedom and reunion with Zaria.

On the night of the Orc attack on the surface Kel’zen dispatched three Orcs in the first six seconds of combat. 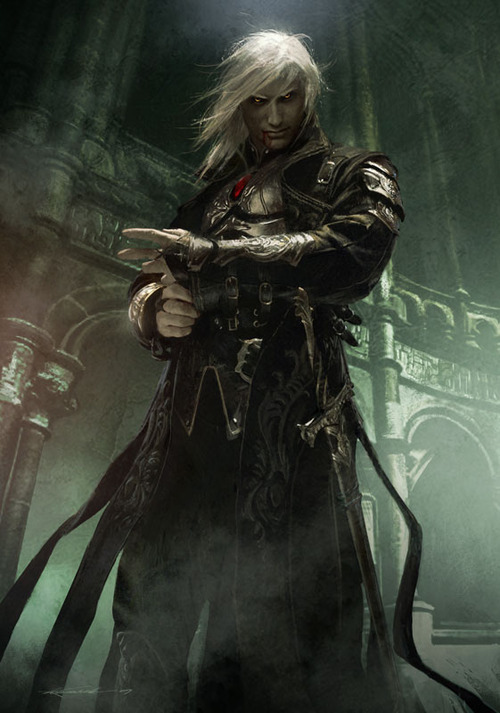