Young Wizard with an interest in archeaology, the younger brohter of Zaria, age 55 (Roghly Human 14)

Dark skinned with the typical loose white hair of the Drow Keilin has a thin build and a youthful cast to his face he appears to be around 14-15 in human years putting him around 50 to 55 in Elven years. The young Drow is a loner and angst ridden teenager, he rebelled from the social conventions of his mother’s people more out of frustration than morale duty. He favors bright red robes and flashy colors to separate himself from a people that have the fashion sense of “spider obsessed strippers” as to quote him. He favors the finer things in life and has a spoiled streak a mile wide.

He carries a strange metal staff that he carries more like a lance or bow that has not functioned since the battle aboard the airship when the party first met Kelin.

His full first name is Kelinidintra {loosely translates as the Legendary Wing Herald but he prefers to be simply known as Kelin (The Wing Legend).

The youngest brother of Zaria’s family. Convinced his family was crazy from the get go he was looking for an escape from the city when he met the party when they first boarded the airship. Excited by the prospect of visiting the outside world. 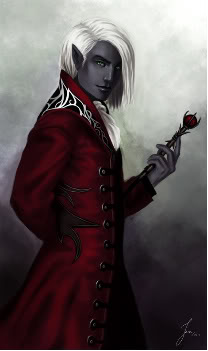